In Las Vegas Nevada, selling a million cigarettes can make you a fortune, but selling one joint can get you arrested, charged, convicted and imprisoned for a felony. On this page, our Clark County NV criminal defense attorneys will tell you all about:

In Las Vegas, the least serious marijuana crime is simple possession for personal use (note that possessing one ounce or less or marijuana is legal as long as it is not in public, and the person is 21 or older). The next least serious marijuana crime is possession for the purpose of sale. Penalties get a lot steeper, however, if you are convicted of doing “unauthorized acts” with the marijuana, such as selling it rather than merely possessing it.

The “unauthorized acts” that this law prohibits include: selling, prescribing, transporting, importing, administering, supplying, bartering, dispensing, exchanging, or giving away the marijuana. Furthermore, just “offering” or “attempting” to do these acts may be sufficient for the prosecution to press charges in Clark County.

Most arrests made under this law involve the sale of marijuana in Nevada, and they are usually the result of 1) an undercover officer setting up a sale with an alleged marijuana dealer, or 2) concealed police officers observing a hand-to-hand sale:

In an effort to catch alleged sellers in the act, the Las Vegas Police routinely orchestrate stings or “controlled buys.” Undercover police officers will contact suspected sellers in person, over the phone, or over the internet to set up a drug sale. These officers may even dress up to appear like druggies.

Remember, an offer to sell or an attempt to sell marijuana is considered just as illegal as selling marijuana. So if an undercover officer approaches a suspect and offers money for weed, and if the suspect then agrees to provide the weed at a later date, the officer may still make an arrest despite that no sale took place.

When police get a tip about a drug deal in Clark County, they may go to the site where the transaction is supposed to take place and set up surveillance. If they witness a hand-to-hand sale, they will then detain the alleged buyer and seller.

Sometimes, if the alleged buyer admits to the officer that he did in fact buy pot from the suspected seller, the officer might let the buyer go and arrest only the seller. This is because selling pot is a more serious crime than merely possessing it, and law enforcement is usually more concerned with busting drug sellers than people who buy small amounts for personal use.

(2) Defenses for sale or transportation of marijuana in Las Vegas, NV. 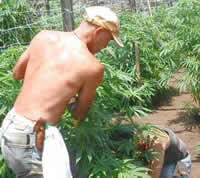 The defenses you may use against a charge involving unauthorized acts with marijuana depend on the specific act that you were accused of and the facts of your case. Here are some common defenses for “unauthorized acts” in Nevada:

If you are accused of dispensing marijuana in Clark County, showing that you are a licensed dispenser under the Nevada Medical Marijuana Program should work as a valid defense to get the case dismissed. (NRS 453A.310)

As described above in the first section, the police are allowed to lure unsuspecting drug dealers into selling them marijuana so that they can then arrest the dealers. it is an extremely unfair police practice. On the upside, however, officers may not induce people into committing crimes that they probably would not have committed otherwise.

Therefore, if you are accused of selling marijuana in Las Vegas, the charge may be reduced to possession or dismissed if you can prove that you would not have sold the marijuana but for the police’s interference.

Lack of credibility or corroboration:

In order to convict you for an “unauthorized act” with marijuana, a Clark County court requires proof that you actually committed the act. This proof usually comes in the form of the officer’s eye-witness account and/or physical evidence, such as bags of pot and cash. If you can show that the officer lacks credibility and/or that there is little physical evidence to corroborate the officer’s testimony, then you may be able to get the case dismissed.

For example, if your case involves an “offer to sell” and therefore no marijuana or money has been exchanged, there is a lack of corroboration because there is no physical evidence. At that point, the only thing remaining against you is the officer’s testimony, and if your Nevada criminal defense attorney can attack his/her credibility, you may be able to get the case dismissed.

(3) Penalties for selling or transporting marijuana in Las Vegas, NV.

In Las Vegas NV, selling or committing other unauthorized acts with marijuana is a category B felony in Nevada. However, if the marijuana weighs in at fifty pounds (50 lbs.) or more, then Nevada’s harsher trafficking laws apply.

Penalties for unauthorized marijuana acts increase with each subsequent offense:

For a first offense, the court may grant probation and suspend the sentence. Otherwise, you may face one to six years in Nevada State Prison with an optional fine of up to $20,000.

For a second offense, OR if you have already been convicted in another court of the same crime, you may face two to ten years imprisonment with an optional fine of up to $20,000. The court may not grant probation and suspend the sentence.

For a third offense, OR if you have already been convicted twice in another court of the same crime, you may face three to fifteen years in imprisonment with an optional fine of up to $20,000. The court may not grant probation and suspend the sentence.

(4) Enhancements for “unauthorized acts” with marijuana in Las Vegas, NV.

For a second offense of selling marijuana to a minor, you may face imprisonment for fifteen years to life, with the possibility of parole after five years. The court may also impose fines of up to $20,000 and other restitution associated with rehabilitating the minor involved. (NRS 453.334)