Does Question 2 mean I can buy weed in Nevada now?

In the November 2016 general election, Nevada voters approved Question 2, making it legal for adults aged 21 and over to buy and use recreational marijuana.

The new law – known officially as the Regulation and Taxation of Marijuana Act — took effect in Nevada on January 1, 2017.

Before then, it was unlawful to use or possess weed in Nevada unless you were entitled to do so under Nevada’s medical marijuana laws. And it is still illegal to sell pot or to possess marijuana with the intent to sell it unless you have a valid license for selling marijuana issued by the state of Nevada. 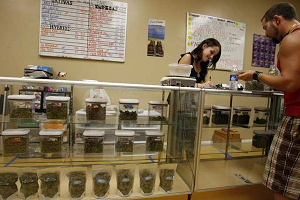 1. How much weed can I legally possess in Nevada?

People in Nevada aged 21 and older are able to legally buy and possess:

A first or second violation of NRS 453.336 is a Nevada misdemeanor drug offense, punishable by a fine of up to $600 for a first-time violation or up to $1,000 for a second offense.

2. When can I buy marijuana in Nevada?

It is now legal to buy up to one (1) ounce of pot in Nevada.

3. Where can I smoke marijuana in Nevada?

Despite the passage of Question 2, it is still against the law to use weed:

State and local governments also retain the right to prohibit or restrict the use of weed in government buildings or pursuant to local zoning or land use restrictions. And since marijuana is still an illegal controlled substance under United States law, it remain unlawful to use or possess weed on federal property located in Nevada. Federal property in Nevada includes (without limitation):

4. Can I grow my own marijuana in Nevada?

The Regulation and Taxation of Marijuana Act makes it legal for adults who do not live within 25 miles of a retail marijuana store to grow up to six marijuana plants in an enclosed locked area starting in 2017.

Otherwise, adults may possess, cultivate, process, or transport up to six marijuana plants provided that:

Violating these restrictions is a misdemeanor that can result in a fine of:

A fourth or subsequent violation is a felony, as is using chemical extraction or synthesis to manufacture marijuana. Either can be punished by one to four years in Nevada state prison.

A person who manufactures marijuana by chemical extraction or chemical synthesis, unless done pursuant to a marijuana product manufacturing license issued by the Department or authorized by chapter 453A of NRS, is guilty of a category E felony. This carries a maximum of 4 years in prison and maybe $5,000, but usually the judge order probation.

5. How does Question 2 affect minors?

It is a misdemeanor for a minor to falsely represent him- or herself as 21 or older to obtain marijuana. It is also a violation of Nevada law punishable by a fine of up to $500 for a minor to enter, loiter, or remain on the premises of a retail marijuana store, unless legally authorized to possess medical marijuana.

For adults, it is a misdemeanor to knowingly give marijuana to, or leave it somewhere for, a minor under 21 unless that minor is a legal medical marijuana user in Nevada. The crime is more serious if the person you give the pot to is under 18. In such case, it is a Nevada gross misdemeanor, with consequences that can include up to one year in jail.