CARING FOR YOUR DOG | By Heather McKinnon
Medical Marijuana for Dogs: Everything You Need to Know
Leah Still watched helplessly as her 13-year-old Akita struggled with degenerative arthritis. Though under a vet’s care and taking glucosamine, big Nero had lost interest in going outside, was moving as little as possible, and would rather lie in a dark room than be social. She hadn’t considered medical marijuana for dogs, but after coming across a product called Therabis at the Denver Pet Expo in August, Still decided to give the hemp-based product a try. She was stunned at the result.

“I’m not exaggerating when I say he was different after a day,” Still recalled in an email. “His eyes were bright again and his playful ‘Hello, happy to see you’ dance was back. I hadn’t seen that in a few years.” After Nero improved to the point of running up and down the stairs, Still and her family started taking him out on short hikes. He can now handle four or five miles. 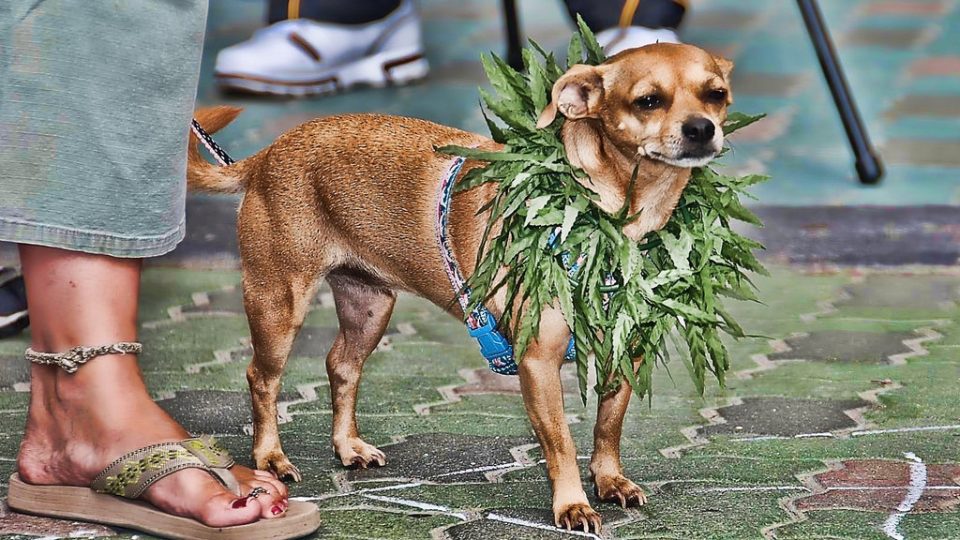 Gregg Steiner’s shepherd-golden mix Dreyfuss was only four when diagnosed with cancer. The news was devastating, and Steiner, not wanting Dreyfuss to suffer, scheduled an appointment to have him put down. In addition, he tried adding CBD oil to his dog’s food, hoping to make his beloved pet’s last days as pain-free as possible.

The change was dramatic. “He was a different dog and much happier,” Steiner recalled. Dreyfuss’ appetite came back, his attitude brightened, and Steiner was able to push the inevitable appointment back another week.

“I was never hopeful that it was going to cure him. I just wanted to comfort him,” Steiner said.

Steiner and Still are just a few of the many pet owners who have reported marked improvement after using a cannabis product on their animals. People are concocting remedies using their own medical marijuana or purchasing retail compounds from a variety of companies for dog ailments like nausea, pain, arthritis, seizures, and anxiety.

Though gaining in popularity, medical marijuana for pets continues to be a confusing topic due to questions over legal issues, safety, and lack of formal research.

It’s important to understand the difference between marijuana and hemp. Both are parts of the same cannabis sativa plant. The buds, leaves, and resin of the plant are the source of tetrahydrocannabinols (THC). THC is the substance that causes a psychoactive effect, or “high” in humans. Some recent strains of marijuana contain more than 20% THC.

The rest of the plant is considered hemp, though that term is not recognized under federal law. The hemp portion of the plant contains less than .3% THC but does include cannabidiol (CBD). CBD works by activating receptor sites in the body’s endocannabinoid system.

Current research into medical marijuana for dogs
As more states pass legislation legalizing both medical and recreational marijuana for humans, veterinarians are finding themselves in need of clearer answers for clients seeking cannabis as an alternative treatment for pets. Research has been difficult due to strict legal barriers, but that is gradually changing as more states pass statutes allowing academic research.

According to Dr. Tim Hackett, Hospital Director and Professor, Emergency and Critical Care Medicine at of Colorado State University, College of Veterinary Medicine and Biomedical Sciences, the truth is is that not a lot of research has been done.

A 2016 survey of Canna-Pet customers conducted by CSU found that over 64% of dog owners felt hemp products helped their animals either moderately or a great deal. While the survey provides promising anecdotal evidence, scientifically-controlled research still needs to be done. In other words, medical marijuana for dogs may be effective, but veterinary science isn’t sure.

“There’s no controlled research at all, much less research into how the drugs are metabolized into target treatment species like dogs,” Hackett said. There are studies on the horizon at CSU and other institutions.

“We’re looking to study the effects of marijuana-based drugs in treating some neurologic conditions,” Hackett said, though he could not speak to the specifics of that study yet.

Therabis, the company whose joint-mobility product helped Nero, has just begun clinical trials at the University of Pennsylvania College of Veterinary Medicine.

What does the law say?
The proliferation of CBD products, even in states where medical marijuana is not legal, is confusing to a lot of people. The Drug Enforcement Agency (DEA) states that marijuana is a Schedule 1 drug under the Federal Controlled Substances Act. Veterinarians cannot prescribe the drug.

However, that act does not include the plant’s stalks under the definition of marijuana. So CBD derived from marijuana would violate the act, but CBD derived from hemp would not. Therefore, the DEA has no enforcement authority over hemp-based products. The Food and Drug Administration (FDA) currently does not condone the use of medical marijuana for dogs and other pets, and each state’s laws on the subject differ.

There are growing number of companies selling CBD tinctures, capsules, topicals, and treats for pets. Below are some of the companies with products for dogs. Testing policies, specific ingredients, and consumer stories are available on their websites.

Therabis: Sachets of cannabinoid compounds in three varieties to treat skin issues, joint mobility, and anxiety
Canna-Pet: Liquids, capsules, treats, and more containing CBD and other cannabinoids
Canna-companion: Capsules containing multiple cannabinoids and terpenes in regular and extra-strength formulas
Treatibles: Blueberry and pumpkin flavored CBD treats
Treatwell: Tinctures in two strengths to put in pets’ mouths or in their food
Help, my dog ate my stash
Medical marijuana for dogs in the form of CBD products is one thing. Accidental ingestion of marijuana is a whole different situation. With more states legalizing medical and recreational pot, pets are becoming increasingly exposed to this risk. Marijuana is much more toxic to dogs than to humans, so though few deaths have been reported, the threat is real. Can dogs get high like humans do? Yes. Is it a good idea? No.

According to the FDA, you should contact a vet if you suspect your pet has been exposed to marijuana and is exhibiting the following symptoms:

Controlled research into pet cannabis is just getting started. As with alternative medicine for humans, ‘natural’ does not automatically equal safe. Until research results are in, the true efficacy and safety of these products remains unproven. Discuss your pet’s health with a veterinarian before deciding on treatment.